Antibacterials are latest products to come under FDA scrutiny 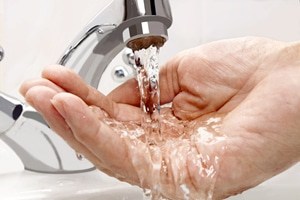 When you work in health care, no matter whether you’re a genetic researcher, certified medical assistant or a veterinary technician, in one way or another, you’re also a scientist.

Striving to improve patient outcomes is a constant exercise in using the scientific method – you observe, hypothesize, test your predictions and re-evaluate. That’s why, when the United States Food and Drug Administration announced on Dec. 16 that it will start requiring manufacturers of antibacterial soaps to prove their products are safe and effective  the scientific urge to think critically may become more apparent in those who work in health care.

People make mistaken assumptions all the time. It might happen because of certain biases or insufficient information or simply because an authority figure told them what to believe. Sometimes, however, people assume something because it has become so ingrained in the public psyche that it’s hard to dismiss it as being false.

That might be the case with one of the most popular products in America: antibacterial soap. After 40 years of testing, the FDA recently announced that it has no evidence to suggest that antibacterial soaps are more effective than plain old soap and water, and they may even have some negative long-term side effects.

“We want companies to actually test these products so that consumers that purchase them have a sense whether there really is any benefit at all over plain soap and water,” Sandra Kweder, deputy director of the office of new drugs at FDA’s Center for Drug Evaluation and Research, said in a statement. “Consumers assume that by using antibacterial soap products they’re protecting themselves and their families from illness, but we don’t have any evidence that they’re better than simple soap and water.”
That is alarming news in a country where antibacterial cleaners are a $1 billion a year business. But between a lack of scientific evidence to prove they are effective and the concern that triclosan, a germ-killing ingredient present in approximately 75 percent of those antibacterial products, may be dangerous to hormone growth in children, the cleaning products industry may be set for a major change. And that means health care professionals are also going to have to talk to their patients about the products they are using to clean their bodies and their homes.

There are several reasons beyond a lack of effectiveness that the FDA is moving against antibacterial cleaners. First and foremost is the inclusion of triclosan and similar ingredients. As further scientific study shows how quickly and easily hormone levels can change in humans, and how important those levels are to overall health, limiting chemicals that can affect or damage them is becoming more important.

Scientists also suspect there is a correlation between triclosan and allergies, with the increase in the number of people who suffer from them being tied to use of antibacterial soaps. That raises other, even more dangerous questions about triclosan, especially in terms of how it might lead to antibiotic resistance, potentially making people harder to treat when they do get sick.

“There are laboratory data showing that bacteria exposed to these products do change their resistance patterns,” Kweder said in her statement, and she indicated that the FDA would like to know more about this potentially serious implication of antibacterial use.

The FDA has been studying antibacterial products since 1972, publishing an initial draft of its findings in 1978. But those results weren’t finalized until now.  By forcing companies to prove their products are what they claim them to be, the FDA has issued a potentially game changing order that will have many ripple effects.

The implications for the health care industry alone could be enormous. First, there is the issue of communication between care providers and patients. For decades, some health care professionals, believing antibacterials to be safe and effective, have been telling people to use them in order to prevent the spread of germs.

Now, that entire notion may be proven false, which means that a new strategy will have to be used. One of the simplest things to do is advise patients to avoid antibacterials, using plain soap and water instead. Another course of action is to suggest they use alcohol-based hand sanitizers.

In the broader view, there is an ongoing cloud hanging over the head of health care in general, and that is the concern over antibiotic resistance in humans. We use antibiotics to control and treat so many different types of illnesses that their ability to effectively attack foreign bodies in our system is crucial to our survival as a species.

Fortunately, this latest FDA announcement follows on the footsteps of other, similar measures, which should not only reduce the chances of widespread pandemics by limiting antibiotic resistance in humans, but also serve to make society a healthier place while making the jobs of health care professionals easier.